My name is Jean Reumers 3de Dan, born on June 6 in 1951 and am going to tell you more about my experiences with Aikido. 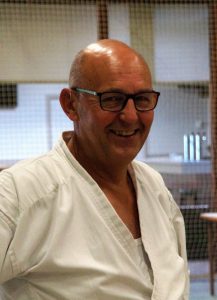 What makes Aikido for me so fascinating is the fluid movements that also remind me a lot of my dance history. I have been teaching for 15 years in standard and Latin dance myself. I also did acrobatic rock n roll at competition level. Due to the hustle and bustle of my job and the growing children, I then had to make choices and stopped dancing.
One day I was introduced to participate in an initiation course in Aikido. Earlier I had already followed a number of lessons Hakorio, so it seemed interesting to me to try this out. My first contact with Aikido was very positive, after the initiation course I also continued to follow lessons and my enthusiasm became bigger and bigger. The first years of lessons in Ophoven were given by Sensei Domien, this was a very educational experience. Because of him, I myself have grown into a teacher that I still do with heart and soul to this day.
A very nice part of Aikido is the spiritual, the various texts and exercises of the Kototama. I therefore repeatedly explain to my students that Aikido is not a fighting sport that you practice on the street but that behind every movement there is an intention and an inner strength that you must learn to master.
Respect for every living being is very important, so it is also important to find a very good balance between body and mind.
Since 1996 I follow the summer internship every year under the guidance of Sensei Stevens John. I have been organizing this summer internship myself for several years now in Kinrooi. They have the necessary infrastructure and everything is managed by me and a few other people on the right track. I always encourage everyone who comes on an internship or who follows my class to read the necessary books about Aikido. Especially the books from Sensei Stevens are a must have.
I hope that you have got to know a bit about me through this little biography.

After practicing Judo and Jyujutsu from the mid seventies, I was tired of the competitive atmosphere in the dojo. One of my high school teachers and now a good friend took me to an aikido dojo in my city of The Hague in The Netherlands in 1987. Aikido immediately grasped me. The teacher, Dick de Wit Sensei was a former Judo teacher student of the late Tamura Sensei and of the Ki-Aikido instructor Yoshigasaki Sensei, an interesting mix.

In 1988 I went to a seminar with John Stevens Sensei. He had just written Abundant Peace, the Biography of O Sensei and the seminar was so confusing and interesting at the same time with a lot of sword-body work and explanation of O Senseis philosophy, that I decided to register for his first Dutch summercamp in 1989 on the spot.

I had dreamt of going to Japan my whole life and Stevens Sensei made it come true. In between my medical studies I squeezed in a full year of being an “uchi deshi” in Stevens Senseis dojo in Sendai, Japan. I was fortunate to be there when Shirata Rinjiro Sensei came forward with his wonderful Misogi no Ken and visit him many times for regular training and intensive training staying at the Yamagata Budokan.

O Sensei’s aikido has so much to offer for personal development and making a difference for and in the world. Classical Aikido has given me so much, mainly because of Stevens Senseis lifetime work of explaining its technical, philosophocal and spiritual aspects. I am happy to keep on practicing, studying and sharing aikido this way.

Heiwakan Dojo in The Hague, The Netherlands is my home dojo where I both teach and train with Michael Reichman Sensei.

I like to share with my students that aikido is wonderful to practice presence, and the 4 virtues: courage, wisdom, love and empathy. Classical Aikido has an immense tool kit to practice everyday. I see it as my mission to keep on using it myself and help people discover it all and not get overwhelmed. 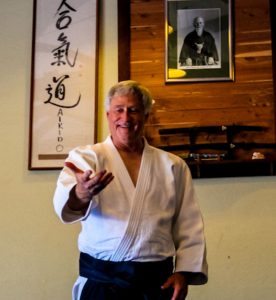 How did I get started practicing Aikido and when?

I got started after practicing Kenpo Karate and Boxing when I saw an ad in a martial arts magazine for a book on Aikido by Koichi Tohei Sensei in 1966. The magazine had a list of schools on its back page and that directed me to a nearby dojo. I started right away, it felt like home, and I have been training ever since.

How did you get to know Classical Aikido and why did you stay?

Where do you teach and what do you find important for your students to grasp?

I teach at Aikido of Petaluma in Petaluma California, which is about 45 miles north of San Francisco. The most valuable area to grasp is O Sensei’s deep spiritual approach to training. There are very few classes where we don’t quote from either The Secret Teachings of Aikido or The Heart of Aikido, both translated by John Stevens Shihan into beautiful and understandable English. I believe O Sensei accomplished three great things. First, he understood at a very deep level how the universe works. Second, he embodied that understanding in a full and functional manner. Third, he left us a system of training to try and follow in his foot

I had read about Aikido and O Sensei in various New Age journals in America during the 1970’s. About 1976 I was introduced to Robert Nadeau Sensei through a mutual friend. We talked on the phone a number of times and he invited me to drive to San Francisco and check out a class, which I didn’t do. Then, some years later I met the late Dennis Tatoian Sensei. This was around 1983 through another mutual friend. At that time he had the famous “Quonset Hut” dojo outside Sebastopol, California. I didn’t follow-up from this meeting either.

In 1990, I made a trip to Japan for my art business. My hosts took me to the Kumano region as a mini vacation. The trip included a visit to the sacred Nachi Falls, an area I later learned was very special to O Sensei. I now joke that because I drank the waters of the sacred waterfall during that visit, perhaps doing that was the final nudge needed to move me towards Aikido.

What happened after I returned was my daughter, who was ten at the time, began taking kid’s classes at a local dojo (Centerfield Aikido). I stayed and observed classes while she trained. When she stopped after two years, I, with great trepidation, stepped on the mat for the first time as a student. This was in October of 1993.

I trained there for three years and then switched dojos to Two Rock Aikido (Petaluma, California) with Richard Strozzi-Heckler Sensei. During the following years, I attended workshops with the Doshu (2004), and with other senior instructors, including a number of O Sensei’s direct students. In 2010 I interviewed John Stevens Sensei for a column I was writing on martial arts and martial artists. I felt a bond happening between us as a result of that interview.

During the following years, Sensei and I kept in touch with each other as teacher and student (I attended his seminars when he was teaching here in the Bay Area), and as friends– we found had many interests in common including writing about Aikido, and Japanese Art (to name two). In 2015 I formally asked Stevens Sensei if I could become his student.  The timing was auspicious as my long-time friend and teacher Bob Noha Sensei (Aikido of Petaluma) was moving in the same direction at the same time.

I am very much at home with Classical Aikido in this my 25th year of the Art. It feels like I have a wonderful Aikido family I can train and grow with for at least another 25 years.